The size of the illegal market remains difficult to gauge, but data and reports from various states are starting to emerge and shed light on the illegal markets eclipsing their legal counterparts. For example, California’s illegal market continues to thrive, encompassing both those who grow as well as those who sell cannabis. A 2019 Forbes article citing New Frontier Data research notes that “as much as 80% of the cannabis sold in California comes from the illegal black market. The research company estimates that the state’s illicit pot market is worth $3.7 billion, more than four times the size of the legal market in the state.” The same Forbes article notes that the pattern of an outsized illegal market in competition with a legal market seems to be found wherever cannabis has been legalized. For example, “[i]n Canada…the black market is expected to account for 71% of all sales in 2019. In Massachusetts, an estimated 75% of cannabis sales will be on the black market [in 2019].”1

Though many markets face different issues that impact the legal market in relation to the illegal market, the effects are the same in allowing a robust illegal market to thrive. In Washington state, where oversupply is a concern, “[t]he huge amount of cannabis grown in the state [pushes] down prices for legal cannabis…[which is] good for local consumers, but a problem for growers, who can earn a lot more selling on the black market in nearby states where cannabis is still illegal.”2 In Colorado, though the market doesn’t face the oversupply concerns of Washington State, “lax enforcement around cannabis farming [makes] it easy for crime syndicates to grow cannabis…and illegally export the plants to other states.”3

“Based on data from other cannabis markets, it’s safe to say 70-80% of cannabis sales in Nevada are through the illegal market.”

Based on data from other cannabis markets, it’s safe to say that 70-80% of cannabis sales in Nevada are made through the illegal market.  Bearing in mind that this means Nevada is collecting taxes from a significant number of sales that would otherwise be made in the illegal market and without public health or safety measures in place, the illegal market can and should be reduced further. Not only do illegal market sales mean losses of millions in tax revenue, but it also signifies increased costs associated with the illegal market in relation to public health and safety. For example, the reduction in opiate prescriptions and overdoses alone is worth consideration in states with legal cannabis. A recent study published by Columbia University’s Irving Medical Center “…found that overall opioid prescribing by orthopaedic surgeons…was reduced in states permitting patient access to medical cannabis, compared with those who do not.” Further, medical cannabis laws “were associated with a statistically significant reduction of 72,000 daily doses of hydrocodone annually.”4 Additionally, a 2014 study looked at medical cannabis laws and opioid overdose mortality and found that, “[i]n an analysis of death certificate data from 1999 to 2010, …states with medical cannabis laws had lower mean opioid analgesic overdose mortality rates compared with states without such laws.”5 While more data is needed to gain a clear picture of the effects of cannabis legalization on non-intentional, opioid-related mortality and opioid prescription volume, these and similar studies highlight the positive effect cannabis legalization has had for patients in many states.

Nevada’s illegal market mostly exists online and sales are made through illegal deliveries, which often appear to be legal. 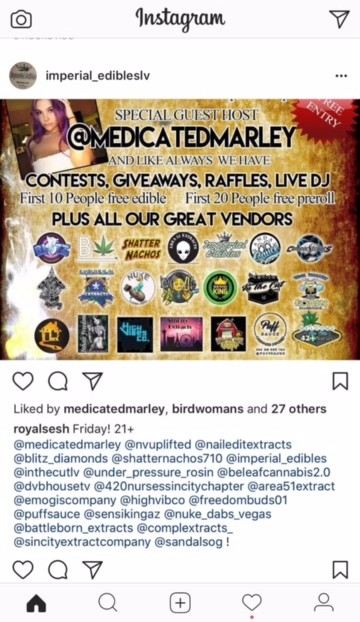 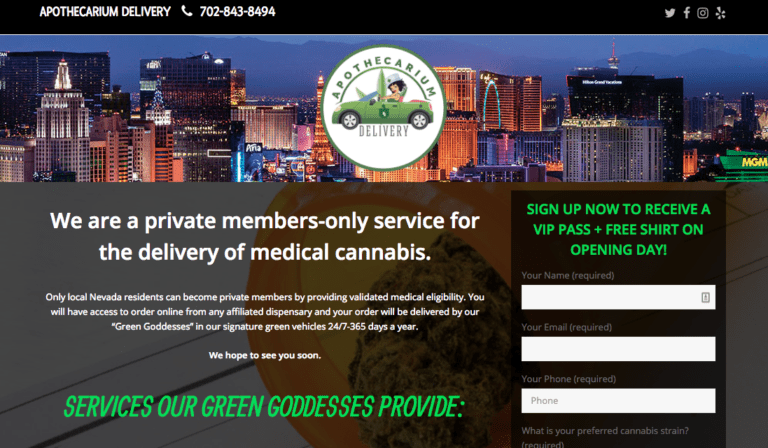 While rare, illegal brick and mortar stores have also cropped up in Nevada, though they have been shut down swiftly.6 In today’s illegal market, it is most often unlicensed “delivery” companies who operate while ignoring the state law requiring that online delivery companies be published on the state’s website. 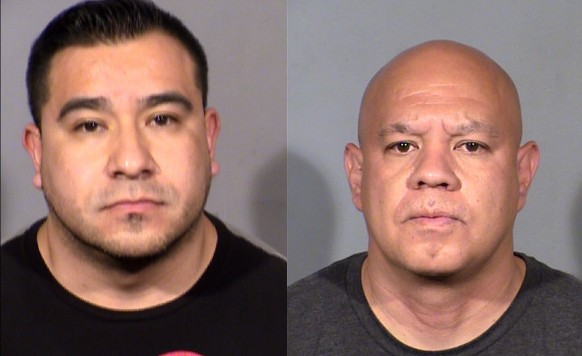 From left to right: Officer Jesus Najera and Eduardo Garcia.

Some of the most egregious examples of illegal market operations are the multiple arrests of law enforcement engaging in cannabis trafficking. The most recent, May 2020 arrest of LVMPD Officer Jesus Najera and his co-defendant Eduardo Garcia shed light on the magnitude of cannabis trafficking in Nevada. The police officer, Najera, and his Nevada Division of Forestry supervisor brother-in-law, Garcia, are accused of trafficking between 100 and 2,000 pounds of cannabis.7 Distributing that amount of cannabis requires a well-oiled distribution machine and sophisticated operations.

The unwitting promotion of illegal sales by local media outlets makes it even more difficult for consumers to determine which sales are legal, including an article published by the Reno Gazette Journal at the height of the initial COVID-19 business closures in April 2020. The newspaper ran a profile of an illegal delivery operation in a story sponsored by and provided by the company.8 These are just some examples of illegal market promotions that are able to reach consumers with little to no interference or enforcement against their sales. 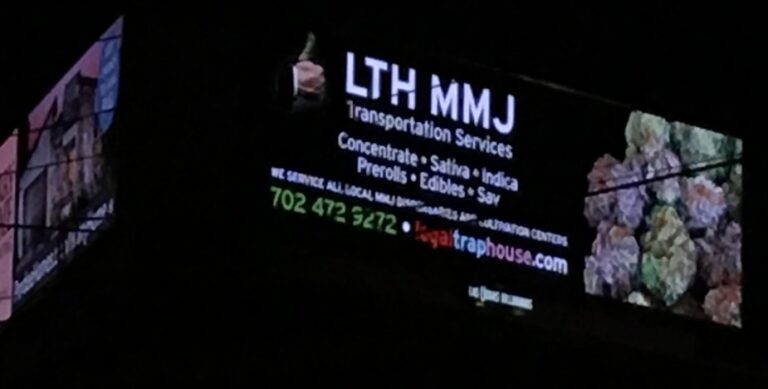 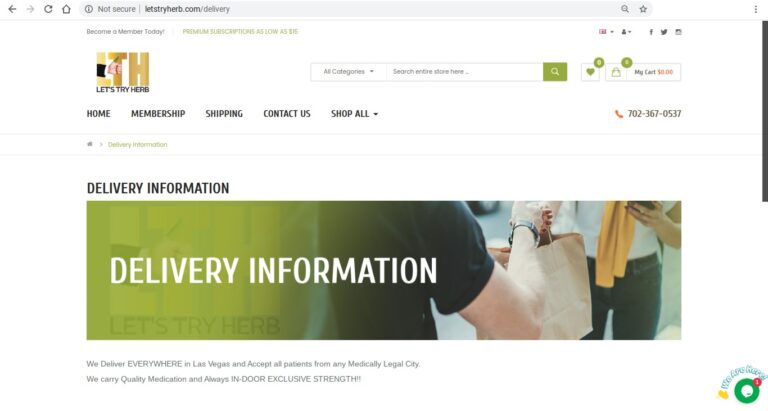 What can be done to reign in the illegal market and transition more of the sales to the legal market? There are two options:

“What can be done…? …Create a regulatory process that allows licensed establishments the ability to provide better, safer products prices that are competitive with the illegal market and which does not allow unfettered, illegal market sales.”

Is it realistic to expect Nevada to be able to put a dent in illegal market cannabis sales? Yes. Consider other industries that require a privileged license (e.g. gaming and alcohol). These operators pay their licensing fees, taxes, and significant regulatory costs and do not have to worry about the illegal operators taking such a big share of the market that it threatens the legal market’s existence. Most of that same agreement is already in place for the cannabis industry in Nevada. Licensed cannabis establishments obtain approval before operating, paying tens of thousands in licensing and administrative fees, hundreds of thousands in regulatory compliance costs, and millions in tax revenue for the privilege of operating legally. In exchange, the state must pledge to make it impossible for illegal, unlicensed operators to flourish.

Whenever taxes or costs are increased, the state must be mindful that a licensed cannabis establishment must keep their prices low enough to compete with illegal market operators. The cannabis market, including tax revenue from cannabis, do not depend as much on supply and demand as they do on how many purchases are being made legally versus illegally. As RCG Economics Founder and Principal, John Restrepo notes, “[u]nlike other industries, supply and demand in the cannabis industry is less of a factor than regulatory conditions. The cannabis industry can be greatly impacted by the tax and licensing structure and the illegal market. Missteps in overtaxing or overregulation can drive people into the illegal market and reduce tax revenue, unlike many other industries.”

“Licensed cannabis establishments obtain approval before operating, paying tens of thousands in licensing and administrative fees, hundreds of thousands in regulatory compliance costs, and millions in tax revenue for the privilege of operating legally. In exchange, the state must pledge to make it impossible for illegal, unlicensed operators to flourish.”

“Missteps in overtaxing or overregulation can drive people into the illegal market and reduce tax revenue, unlike many other industries.”

When it was founded in 1955, the GCB was plagued by illegal activity and initially struggled with businesses that did not operate above board. Today, illegal casinos and online gaming do not pose a threat to Nevada’s legal gaming operators, all thanks to the development of the GCB and cooperation between regulators, the industry, and Nevada stakeholders.

There are short-term and long-term goals that must be met for Nevada to successfully reduce illegal market sales. There are also approaches that other regulatory bodies have taken that can be applied to Nevada’s cannabis industry, including the previously mentioned successes of the GCB, which provide a playbook for strict and effective regulation. Nevada can also look to California and Massachusetts, which have both recently embarked on implementing civil enforcement measures.

The California legislature has introduced Assembly Bill 2122, which proposes to impose fines of $30,000 on any person engaging in criminal cannabis activity or assisting in such activity. This is likely even more impactful in California, given the thousands of illegal dispensary brick and mortar stores and operations throughout the state, but could still be helpful to curb advertising of illegal cannabis activities on billboards and newspapers in Nevada.

In Massachusetts, the state Attorney General encouraged the state’s legislature to clarify existing law to allow for increased civil enforcement on illegal cannabis activity. Specifically, three recommendations were made in a report published in February 2020 by the Massachusetts State Cannabis Control Commission and state Attorney General’s Office. The report first recommends amendments to state law to clarify that existing law and “criminal statutes apply to licensed marijuana operations engaging in activities such as inversion and diversion.” The joint report’s second recommendation advocates in support of “the concept of an inter-agency task force to encourage coordination among administrative agencies and law enforcement to target illegal sales and the illicit market; to promote, where feasible, alternatives to arrest; and to enable the efficient sharing of information and use of resources to narrow the illicit market and achieve compliance with the law.” Finally, the report’s third recommendation supports “expanding [the Department of Revenue’s] authority to assess…taxes at the same rates for illegal sales as legal sales of marijuana. As with criminal penalties, the goal is to have a deterrent effect on the illicit market.”9

As the gaming and alcohol industries prove, transitioning from a prohibited industry to one in which there is little illegal activity doesn’t happen overnight. However, there are short-term and long-term measures Nevada should take to capture tax revenue being lost to illegal market purchases.

It is imperative that Nevada prepare a report identifying gaps in enforcement and recommendations on which agencies should have jurisdiction over illegal market activities. This report is required under Assembly Bill 533, which creates a subcommittee specifically for the purpose of assessing gaps in enforcement, assessing the size and scope of Nevada’s illegal market, and must include recommendations on closing gaps in enforcement. Assuming the CCB is responsible for enforcement10 against illegal activity (as indicated in the legislative hearings when the CCB was created), the CCB should conduct enforcement against the widespread and conspicuous advertisements that can be seen in various media, including billboards, newspapers, and online.

“It is imperative that Nevada prepare a report identifying gaps in enforcement and recommendations on which agencies should have jurisdiction over illegal market activities.”

Ultimately, Nevada’s strongest tool in avoiding lost sales and revenue to the illegal market is a regulated market that offers safe products at a price competitive with the illegal market. This, combined with closing the gaps in enforcement and proactive measures to derail pervasive and sophisticated illegal sales, could greatly increase the net monies the legal revenue collection is able to reach and reduce the public health and safety concerns caused by the illegal market.